When a toxin enters a biological ecosystem, its effect is magnified as it moves up the food chain. Even if it can be cut off at the source, the ever-widening distribution of its increasingly harmful form can cause problems for decades. Misinformation functions in a similar fashion, gaining traction as it’s repeated by increasingly high-profile individuals who venture ever further from the source material. In this manner, distortion about the facts of sexual assault has affected the training of judges, prosecutors, and other law enforcement officials. It is how misleading assertions become embedded in criminal and military law. This is […]

If President Obama — or his successor — replaces the late Justice Antonin Scalia with a strong liberal, the Supreme Court’s balance will swing dramatically to the left in the coming years. It might well be the biggest ideological swing in recent memory.

Justice Antonin Scalia ‘s dreadfully worded comments last week during oral argument about racial preferences in college admissions understandably offended many people. But what he was obviously trying to say made an important point that had nothing to do with racism — a charge hurled at Scalia by people including Harry Reid, the Senate Democratic leader, who once again wallowed in shameless demagoguery. 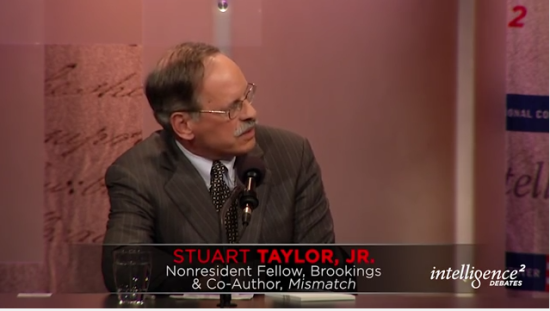 WASHINGTON, D.C. – Six Supreme Court justices Thursday came down for common sense and judicial self-restraint by rejecting, over bitter dissents, a legal challenge that had threatened to cripple President Obama’s Affordable Care Act in 34 states. Because the court sided with the president, Obamacare will continue in effect with no change from the current pattern of distributing to many millions of low-and-middle-income people in all 50 states the premium subsidies (in the form of tax credits) that make health insurance affordable for many or most of them.

The Supreme Court Thursday upheld a key part of the 2010 health law – tax subsidies for people who buy health insurance on marketplaces run by the federal government. KHN’s Mary Agnes Carey discusses the decision with Stuart Taylor Jr., of the Brookings Institution, and KHN’s Julie Appleby.

Although the Supreme Court’s 5-4 ruling in favor of gun rights is getting most of the attention during its busy, final day before a three-month recess, there were several other significant rulings. Here are the highlights:

– The justices ruled by 5-4 that the University of California’s Hastings Law School can deny official recognition, funding, and campus facilities to a Christian student group that excludes openly gay students and others who will not follow the group’s religious tenets from obtaining leadership roles.

Justice Ginsburg’s majority opinion, with Justice Kennedy joining the four liberals this time, stressed that the Christian group was seeking “a preferential exemption” from Hastings’s policy of recognizing and assisting only student groups that “open eligibility for membership and leadership to all students.”

Justice Alito’s dissent, joined by the three other conservatives, complained that that the principle underlying the majority’s decision was “no freedom for expression that offends prevailing standards of political correctness in our country’s institutions of higher learning.” The case was Christian Legal Society v. Hastings College of the Law.

– The court struck down as an invasion of presidential power a key provision of the 2002 Sarbanes-Oxley law, which was designed to prevent corporate accounting scandals like those that had caused the collapse of Enron and WorldCom.

The now-voided provision provided an unusual two-level protection against removal for members of the newly created Public Company Accounting Oversight Board. It provided that neither the Securities and Exchange Commission nor the president could dismiss board members without some “cause.”

Senate Judiciary Committee Chairman Patrick Leahy has floated the idea of passing a new law to allow a retired Supreme Court justice to sit on a case in which a current justice has recused, to avoid 4—4 ties.

This proposal, reported on June 16 by National Law Journal’s Blog of Legal Times based on an interview with Leahy, who said he had drafted a bill and would probably introduce it, would be “a major shift in how the Court operates,” the blog said.

Here’s the BLT report. Leahy’s idea raises interesting questions and there is much to be said both for and against it.

But why is it popping up now? And why was Senator Orrin Hatch, R-Utah, so quick to tell the blog that his initial reaction was negative?

It has been widely known for many decades that recusals can produce 4-4 ties, an outcome regarded as a waste of the Court’s time because a tie vote creates no Supreme Court precedent, leaving the lower curt decision undisturbed, as though the justices had never studied the briefs, heard arguments, and cast their votes.

Leahy said that he got the idea of enlisting retired justices to avoid 4—4 votes from soon-to-retire Justice John Paul Stevens, who suggested it during a meeting.

Hmmmm. It’s not hard to see why Stevens–who is still sharp at age 90 and appeared to be torn about his decision to retire – might like to keep his hand in now and then.

As for Leahy, he is well aware that the only living justices who have already retired are David Souter and Sandra Day O’Connor.

Justice John Paul Stevens, who in most portrayals has migrated from the center of the court when appointed by President Gerald Ford in 1975 to its left flank, has told several reporters that his ideology has not really changed much. Rather, according to Stevens, he has remained about where he always was, while newer and younger appointees have pushed the court to the right.

The record suggests otherwise. Like many of us, this extraordinarily intelligent, self-effacing gentleman, who turned 90 on April 20, may be kidding himself a bit about his own consistency.

Like some other Republican-appointed justices in recent decades – Harry Blackmun and Sandra Day O’Connor and, to a lesser extent, David Souter , Warren Burger and Lewis Powell – Stevens has become markedly more liberal during his years on the court. Meanwhile, no Democratic-appointed justice has become substantially more conservative over time. This helps explain why, despite the fact that Republican presidents have appointed 12 of the last 15 justices, the court itself has never – or, at least not yet – made the dramatic right turn that many reporters and commentators have repeatedly proclaimed. Indeed, the court’s rulings have remained left of the center of general public opinion on most (though not all) of the biggest issues.

What explains the asymmetry in justices’ evolution? More on that below. First, some facts about Stevens and other leftward-moving justices.

Seen in his early years as an idiosyncratic loner given to writing separate opinions joined by no other justice, Stevens was never a solid conservative. But he joined conservatives on ideologically charged issues, including racial affirmative action, the death penalty, rights of criminal defendants, freedom of speech and government funding of abortion. Since about the mid-1980s, however, he has taken positions markedly to the left of where he started on these and other big issues.